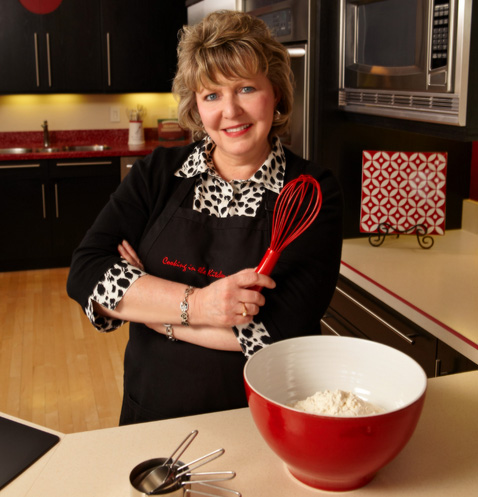 Nina is all about food!!!  In January 2006, Nina began teaching cooking classes in her home kitchen: “Cooking in the Kitchen with Nina.”  She wants to help people get over their fears in the kitchen and make cooking fun—so that people will cook more at home for their friends and family. Nearly all the recipes Nina shares in her classes are original recipes that she has developed. She teaches several classes each week on a wide range of topics and interests.

Nina Swan-Kohler is a home economist, nutritionist, culinary professional, cookbook author, cooking school director and instructor of “Cooking in the Kitchen with Nina” Cooking Classes. In addition, she owns and operates a small kitchen equipment and gadget boutique in conjunction with her cooking classes. She is also a public relations practitioner and owns and operates Swan-Kohler & Associates Public Relations, located in Robins, Iowa.

Nina earned a bachelor’s degree in home economics education from Southeast Missouri State University, Cape Girardeau, MO. She earned a master’s degree in foods and nutrition and communications from the University of Missouri, Columbia. Swan-Kohler has worked in the culinary and food marketing industry for over 30 years. Nina develops and markets creative and delicious recipes for her food clients each year. Her recipes, feature articles and food photography continue to appear in numerous newspapers and magazines nationwide. She has been an active member of professional organizations throughout her career. She is currently a member of the Les Dames d’Escoffier and the International Association of Culinary Professionals (IACP).

An expert in all things concerning food, Nina has worked for National Oats Company and CMF&Z Advertising and Public Relations in Cedar Rapids, and many food companies throughout the United States, including Pioneer Flour Mills, White Lily Flour, Farmland Foods, Kraft Foods, West Liberty Foods, Burleson’s Honey, Seaboard Farms Chicken and many others.

Nina develops creative and tasty recipes; conducts cooking demonstrations; writes feature articles for newspapers and magazines and does food styling for photography. She has been featured in Midwest Living, Southern Living and Southern Lady magazines. Nina has written food columns for “The Woman Today” and “City Revealed” magazines. She is currently writing monthly food features for the Cedar Rapids’ Gazette Newspaper. She also appears on local television regularly. In 2003, Nina authored and published her first cookbook: “Tailgates to Touchdowns: Fabulous Football Food.”

A lot like having the Food Network in Cedar Rapids . . .

Nina Swan-Kohler has many things in common with the celebrity chefs and cooks on the Food Network, however she offers a much tastier experience. You get to eat everything she makes in the classes, so come hungry!